Abandoned Baby Giraffe Dies With Dog by Its Side 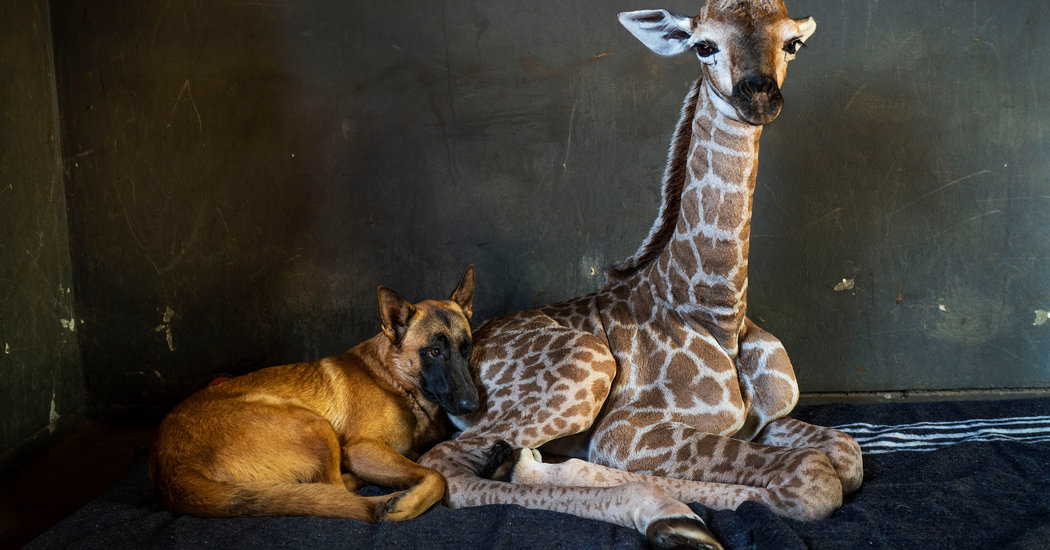 JOHANNESBURG — A baby giraffe that was befriended by a dog after he was abandoned in the wild has died, a South African animal orphanage said.

The giraffe, named Jazz, collapsed after suffering a brain hemorrhage, the Rhino Orphanage in Limpopo Province said in a Facebook post on Friday.

“Our team is heartbroken,” the orphanage said. “The last two days before we lost him, Jazz started looking unstable on his legs and very dull, almost like he wasn’t registering everything,” it added. “He suddenly collapsed and we could see blood starting to pool back into his eyes.”

The baby giraffe had arrived at the orphanage a few weeks ago, just days after its birth. A farmer found him in the wild, weak and dehydrated, and called the center for help.

The orphanage’s Facebook page featured dozens of photos documenting Jazz’s progress during his weeks at the facility. They showed the baby giraffe and his friend sleeping side by side on blankets and wandering outdoors together.

When the giraffe became ill, Hunter seemed to realize something was wrong and did not leave the baby giraffe’s side, the orphanage said. The dog was there when the giraffe died, and sat in front of the empty room for hours before going to its carers for comfort.

Orphanage staff members had assumed that the mother giraffe had abandoned the baby for a reason, and had suspected an illness, Arrie van Deventer, the orphanage’s founder, said.

“We finally know that Jazz didn’t have a bad giraffe mother that left him,” the orphanage’s statement said. “She just knew.”

In its farewell to the giraffe, the orphanage said, “You have taught us so much in the last three weeks, and we will remember you fondly.”

The giraffe was buried close to the orphanage, Mr. van Deventer said.

The post had thousands of views and hundreds of comments expressing sadness for the giraffe’s death and concern for how Hunter would handle the loss.

The orphanage said that Hunter was doing well and would continue training to be a tracking dog.

A final photo showed Hunter sitting in front of the closed door of the room where he and the giraffe had spent time together. The orphanage also paid tribute to Hunter’s loyalty.

“He stayed till the end and said his goodbyes,” it said. “Such a good boy.”