The Shift: Inside the Home of Instant Pot, the Kitchen Gadget That Spawned a Religion 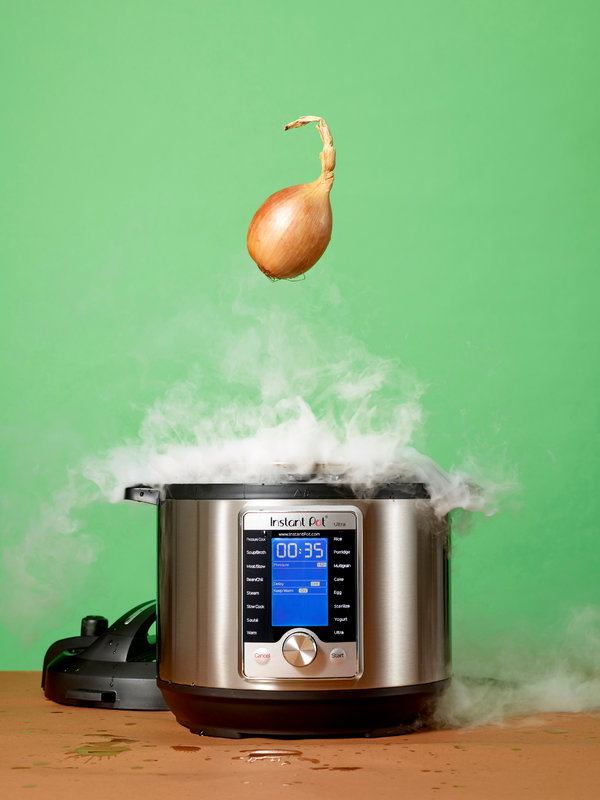 KANATA, Ontario — Truth be told, the headquarters of Instant Pot don’t look much like a church.

But inside this sterile, gray office building on the outskirts of Ottawa, behind a door marked only by a small metal sign, a new religion has been born.

Its deity is the Instant Pot, a line of electric multicookers that has become an internet phenomenon and inspired a legion of passionate foodies and home cooks. These devotees — they call themselves “Potheads” — use their Instant Pots for virtually every kitchen task imaginable: sautéing, pressure-cooking, steaming, even making yogurt and cheesecakes. Then, they evangelize on the internet, using social media to sing the gadget’s praises to the unconverted.

“Oh my goodness!” reads a fairly typical Amazon rave, one of more than 25,000 reviews on the site for the Instant Pot. “This is the best kitchen gadget to ever exist in the history of ever.”

An enthusiast in the Instant Pot Facebook group, which has more than 850,000 members, wrote “Using my Instant Pot has totally changed my life.”

The Instant Pot is hardly the fanciest appliance on the market; several models sell for under $100. But it has upended the home-cooking industry. During this year’s Black Friday sales, the Instant Pot was among the Top 5 items sold by Amazon and Target, and among the Top 3 best-sellers at Kohl’s. The company, which is privately held, doesn’t release sales data, but said it was “very happy” with Instant Pot’s sales, which have been more than doubling every year since 2011. Sales of electric multicookers have risen 79 percent in the past year to more than $300 million, according to NPD Group, a market research firm.

I went to Kanata to get a peek behind the scenes of the Instant Pot phenomenon and meet its creator: Robert Wang, who invented the device and serves as chief executive of Double Insight, its parent company. What I found was a remarkable example of a new breed of 21st-century start-up — a homegrown hardware business with only around 50 employees that raised no venture capital funding, spent almost nothing on advertising, and achieved enormous size primarily through online word-of-mouth. It is also a testament to the enormous power of Amazon, and its ability to turn small businesses into major empires nearly overnight.

Mr. Wang, 53, did not set out to be a kitchen mogul. An engineering whiz who grew up in Harbin, China, as the son of two professors, he earned a Ph.D. in computer science and intended to develop artificial intelligence systems for a living. After a series of telecom and tech jobs, he was laid off from his dot-com position in 2008, just as the global financial crisis hit.

After a brief and unsuccessful attempt to start his own tech company, Mr. Wang turned his attention to kitchen appliances, a market that hadn’t yet been visited by the tech industry’s disruption fairies. A lapsed home cook whose busy schedule rarely allowed him to make healthy meals for his wife and two children, Mr. Wang recruited two other engineers and spent 18 months and $350,000 of his savings developing a high-tech device that would combine pressure-cooking, slow-cooking, sautéing and other common cooking functions in a single appliance. In a news release announcing his invention in 2013, he called it the “iPot” — an Apple homage that his trademark lawyer soon nixed.

In person, Mr. Wang is soft-spoken and earnest, with a nerd’s enthusiasm for the technology that powers the Instant Pot. (That enthusiasm extends to his other creations as well: At various points during our interview, he read me excerpts from his doctoral dissertation on logic programming languages, and showed me the hand-built website he made to host photos of his family.)

In 2010, after several months of sluggish sales in and around Ontario, Mr. Wang listed the Instant Pot on Amazon, where a community of food writers eventually took notice. Vegetarians and paleo dieters, in particular, were drawn to the device’s pressure-cooking function, which shaved hours off the time needed to cook pots of beans or large cuts of meat.

You wouldn’t know it from his small, bare-walled office, but Mr. Wang, who cooks steamed sweet potatoes and soft-boiled eggs in his three Instant Pots at home, has built a profitable empire. Exact figures are elusive because the company is private and has never raised money from outside investors, but there is no doubt that as the company’s largest shareholder, Mr. Wang has done very well.

“They’re expanding as fast as they can produce the appliances,” said Coco Morante, a food writer and author of “The Essential Instant Pot Cookbook.” “They’ve built this word-of-mouth advertising and community around their appliance that’s pretty fervent.”

But why, and why now? After all, pressure cookers aren’t new, and most of the Instant Pot’s functions are replicated by other common kitchen appliances. Mr. Wang credits the device’s technological advances — most notably, a group of sensors that keep the cooker from overheating or exploding under pressure.

Instant Pot’s internet fandom also gives it a leg up. The food bloggers behind popular recipe sites like Nom Nom Paleo were early converts to electric pressure-cooking, and cookbook authors took note of the device’s cult appeal. Mr. Wang says that more than 1,500 Instant Pot cookbooks have been written, including several of Amazon’s current best-sellers.

Amazon has played a particularly large role in Instant Pot’s rise. Early on, Instant Pot joined the “Fulfillment by Amazon” program, in which Amazon handles the packing and shipping of a seller’s products in exchange for a cut of each item sold. Eventually, Instant Pot sent Amazon wholesale shipments directly from factories in China, and Amazon began promoting the machines in its major annual sales. At one point, more than 90 percent of Instant Pot’s sales came through Amazon.

“Without Amazon, we wouldn’t be here,” Mr. Wang said.

Kitchen appliance fads tend to come and go (R.I.P., George Foreman grill). And major appliance makers like Cuisinart and Breville have taken note of Instant Pot’s success and introduced electric multicookers of their own. But Mr. Wang said he believed that the Instant Pot’s passionate online following will protect it from being crushed by a larger rival. He showed me videos in which fans sang the Instant Pot’s praises, and a blog post about a woman who credited her Instant Pot with helping her lose 83 pounds.

He also revealed a secret: in every official photograph of an Instant Pot, the unit’s timer is set to 5:20 — a series of numbers that, when spoken aloud, sounds like “I love you” in his native Mandarin.

“It’s a subliminal message,” he said. “It shows how much we care about our customers.”

Mr. Wang declined to comment when I asked about Instant Pot’s plans for future products. He said the company wanted to modernize other “legacy appliances” in the kitchen by adding sensors and microprocessors, and eventually using Wi-Fi to connect them to the cloud.

Not that Instant Pot needs to branch out just yet. According to the NPD Group, only 11.5 percent of American households own electric multicookers. Which means that there are still millions more potential Potheads out there, still making their vegetarian curries and chili con carne the hard way.

Mr. Wang wants to convert these poor souls, and bring them into his flock.

“We know we really make a difference in people’s lives,” he said. “It’s really gratifying.”