What Will Tomorrow’s Workplace Bring? More Elbow Room, for Starters 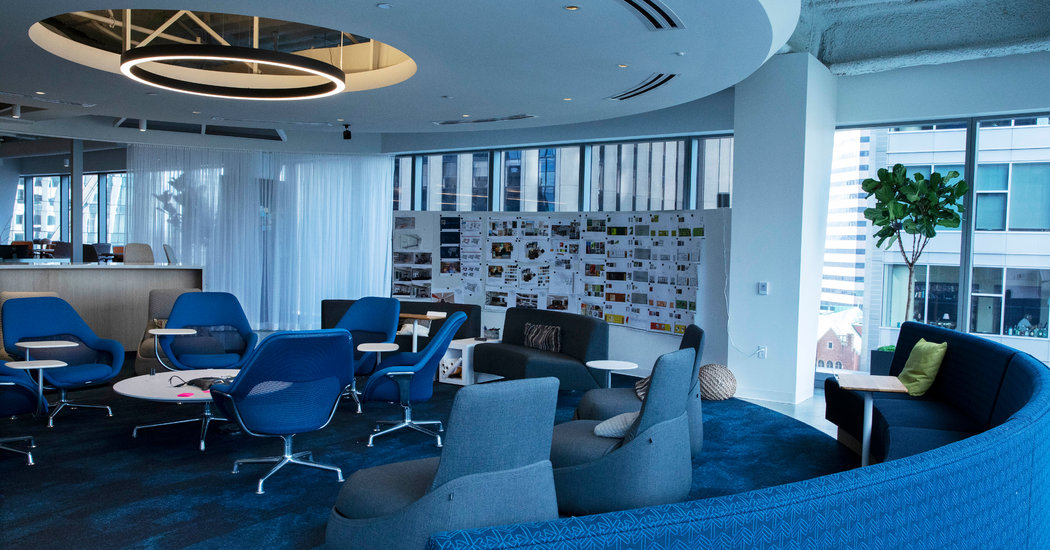 Many Americans are weeks, if not months, from returning to their offices and regaining a semblance of a normal workday. Given the recent layoff and furlough announcements, many are wondering whether they will even have a job after the dust settles.

But building owners and company leaders — and those who help them manage properties and design workplaces — have begun to anticipate the time when the shelter-in-place orders are lifted and people start heading back to the office. Those in the midst of planning suggest that the post-pandemic office might look radically different.

Returning workers can expect stepped-up cleaning and a reinforcement of social distancing. Hand sanitizer stands will probably be positioned in lobbies. Maintenance staff will swab door handles. There may be limits on the number of people allowed in an elevator.

Workplaces may have significant changes in the long run, including new seating arrangements and the addition of building materials that discourage the spread of germs. New technology could provide access to rooms and elevators without employees having to touch a handle or press a button.

Even if such changes won’t greet most employees at first, their return to the office may be carefully choreographed.

In the short term, signs may be posted reminding everyone to wash hands — and perhaps stick with elbow bumps rather than handshakes and hugs. Disinfectant wipes will be everywhere.

Some companies are considering phasing in employees to limit the number of people on the premises and ease them back to office life after a prolonged period of sequestering at home.

Remote-work practices that many companies have scrambled to adopt in recent weeks are likely to continue in some form for the foreseeable future, leaving some offices lightly populated and making it easier for workers to spread out.

Alternating groups of employees at the office is also under discussion.

“There could be A teams and B teams working different days,” said Scott Rechler, the chief executive and chairman of RXR Realty.

Over the past decade, many companies eliminated private offices in favor of open plans, but the amount of space per office worker declined 25 percent, said Janet Pogue McLaurin, an architect and principal at the design firm Gensler, which has been tracking changes in the workplace in annual surveys since 2008.

The typical workstation of a decade ago — the cubicle — was 8 by 8 feet. By 2015, the workstation was down to 6 by 8 feet, and in recent years, the contraction has continued.

Benching — desks lined up side by side — has been another way workers have been squeezed.

A benching desk with a width of six feet would be consistent with current social distancing guidelines from the Centers for Disease Control and Prevention. But many desks are not that wide. And often one row of desks faces another row, so that employees are directly opposite their peers.

To create a six-foot radius around each employee, companies may have to pull desks apart or stagger employees so they are not facing one another, experts say.

Companies are considering other ways to give employees breathing room.

A conference room intended for 12 might be repurposed as a meeting room for six. In lounge areas, chairs could be placed farther apart. Chairs on casters will permit people to roll seats a safe distance from colleagues.

“The whole point of kinetic furniture was to bring people together,” said Kelly Griffin, a principal at NBBJ who leads the architecture firm’s workplace strategy group. “Now it has a different function: to pull people apart.”

Ten percent of American office workers no longer have assigned seats, according to Gensler. This so-called hot-desking, or hoteling — where employees do not have designated desks but instead come in and find a place to sit — may go on hiatus, if only until the fear of contagion fades.

“Maybe we don’t move around quite as much,” Ms. McLaurin said.

Or gather in large groups. All-hands meetings may not resume immediately, said Michael Kleinberg, president and partner of MKDA, an interior design firm. “Nobody is going to want to come,” he added. “I think there’s going to be a continuation of Zoom meetings for a while.”

However, the pandemic may result in fundamental changes that will be around for years to come, altering how office buildings are designed.

Just as the Sept. 11 terrorist attacks created tighter security measures in office buildings and flooding from Hurricane Sandy prompted the elevation of mechanical systems, the coronavirus may focus attention on air circulation and filtering.

Sensor-activated controls may also increase, reducing the number of surfaces that need to be touched in an office and allowing workers to use elevators and open doors with the wave of a hand.

Certain materials may come to the fore. Smooth surfaces that are easy to wipe will be preferable to textured or porous ones that could harbor germs. And antimicrobial materials used in hospitals and laboratories may migrate to offices. Interest has surged in new materials such as those that mimic sharkskin, to which microscopic organisms have difficulty adhering.

Some old metals may experience a revival. Copper and its alloys — including brass and bronze — have been shown to be essentially self-sanitizing, able to kill bacteria and, early studies suggest, perhaps even the coronavirus plaguing the planet.

The ability to work from home at least a few days a week — long sought by many American workers — may be here to stay.

Even firms that previously insisted on everyone being in the office — either from force of habit or a suspicion that employees would loaf if not under management’s watchful eye — have discovered that the work-from-home experiment that the crisis has thrust on large swaths of the American work force has turned out better than expected.

“A big light bulb went off during this pandemic,” said Anita Kamouri, vice president at Iometrics, a workplace services firm.

Kate Lister, president of Global Workplace Analytics, expects more than 25 percent of employees to continue working from home multiple days a week, up from less than 4 percent who did so before the pandemic.

“I don’t think that genie is going back into the bottle,” she said.

Already preliminary findings from a new study by researchers at the Massachusetts Institute of Technology suggest that more than 34 percent of respondents have switched from commuting to working at home across the United States. In the Northeast, more than 40 percent have made the switch.

The digital infrastructure for remote work already existed, said Erik Brynjolfsson, director of the M.I.T. Initiative on the Digital Economy and a co-author of the study. “The tools people found are working pretty well,” he said.

If companies do allow more of their employees to log in from home, some may consider reducing their office footprint, which could have significant ramifications for commercial real estate.

But if the amount of space devoted to employee workstations and other functions increases, demand for space could balance out.

Lounges, cafes and other gathering spaces that sprang up to make collaborative work easier may become even more important if employees do more work from home and commute in for meetings.

At the Seattle office of B+H Architects, an informal space called the Sandbox was designed as “a place to meet and exchange ideas,” said Doug Demers, a managing principal at the firm.

The circular room has a large digital screen for sharing information and curved seating that provides a sense of enclosure.

People working from home could call in remotely, Mr. Demers said, but he thinks this kind of space will be one of the things that draws employees back to the office because it helps provide a sense of community.

“There will be a higher value around spaces where we come together,” he said.